1) Stage 1: collect Moss, DreamGrass, SoulAroma. They can be dropped by any monsters.

+ To get a Feather Stone: give 3 ghost horns to Arthur and he will make you an Evil Tooth. Bring Evil Tooth with Moss, DreamGrass, SoulAroma to WaterSeal (883,447) (look the map below and it’s labeled W).
V
+ To get a VigorFragment: give 3 FeatherStones to Arthur to make an ImmortalStone. Bring ImmortalStone, Moss, DreamGrass, and SoulAroma to Fireseal (920,929) (look the map below and it’s labeled F).

– Give 3 PureVigor to Arthur and you’re done with stage 1. 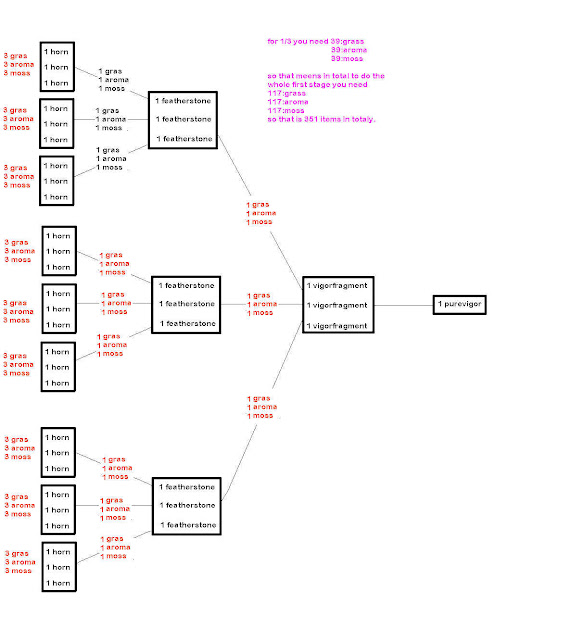 – Below is the map that you will use throughout the quest. 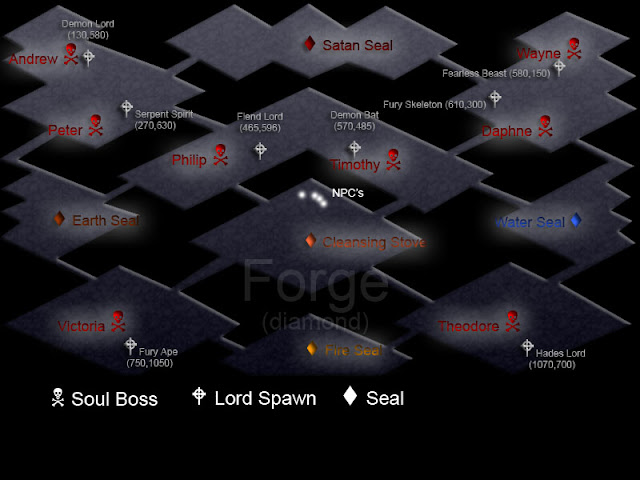 – I didn’t take much screen shots for this, so I’ll post the one that I have.

***Warning: kill bosses by yourself when you summoned them otherwise you won’t get quest items like GhostHorn, FeatherStone, VigorFragment, etc.

Also, all bosses at EarthSeal, WaterSeal, FireSeal, and SatanSeal (more about this later) will use magic attack, so if you’re not strong enough bring a high lvl water and fire tao to tank for you.

NOTE: Quest will be saved as you’re doing it, so don’t worry about log in and off anytime. However, when you SUMMON BOSSES BE SURE TO KILL IT or you won’t get quest items.

– Talk to Bryan and he will ask you to raze the mountain of grievance to the ground by killing different monsters.

– The mountain of grievance, which is 40000 meters high, is existed in the mirror of Bryan and formed by the grievance of the dead souls. The mountain will sink for different meters according to the monsters you’ve killed.

– You can check how high the mountain of grievance remains by inquiring Bryan.

+ So basicly, you need to kill monsters to get the moutain height down. Each monster you killed it will drop a certain amount and here how it works. There are many spawns and let take this spawn for example:

– Talk to Angela for all the details.

– After you’ve gotten 21600 drops of blood, then find SquamaBead and kill Satan.

– To get SquamaBead, you should go to kill monsters like SerpentSpirit, HadesLord and DemonLord etc. (these guys appear near the Guards).

– Bring pots when you’re fighting Satan because he has 3 different forms. Best is to bring a 120+ tao to tank for you. As you will know why after you see the screenshots.

– After you killed Satan, then you’re done. Warning: if you leave the 2nd rb quest map then you can’t come back. Talk to Alex again and he will let you rb.

FAQS Section: These questions are the one I came across from people asking in the old thread.

Tip to kill it fast: Bring friends, they can help you attack it to lower satan health then let the 2nd rb person kill it.

4) Does warrior superman have any effect on monsters?
Ans: Yes, it does just like normal map. However when you fight bosses and satan in that map, your damage will reduce, I believe, 10 times.

5) How long does it take to kill Satan (all 3 forms)?
Ans: It varies on how many friends you can bring to help you kill it. It should be less than 10 minutes if you can bring 2 or 3 friends level 130.

6) How long did it take to finish the quest?
Ans: I was doing it with my brother. I’m on the trojan and he’s on the archer both are 130. It tooks us like 4 days not straight (just counting from the day it released until I’m finished) and about 6+ hours a day since we had school.

7) How bad is it to level after 2nd rb?
Ans: It’s horrible since it’s 3x slower. I remember I went to lab 2 when I’m 110, I spent like 2 hours+ and got 15 pc then I gave up. Mostly tging until I was 120 and then plvl the rest of the way. That was the past without exp ball and db leveling, now you can use those to help level faster.

8) If someone else helps you kills a boss you’ve summoned but you get the final kill is the chance of it dropping 100%?
Ans: Yes.

9) Will the proficiency for skills, magic, weapon be auto fixed like 1st rb?
Ans: Yes, it will auto fix after it reaches certain level. For weapon, I think you need to get to level 8 then it will become the level you have during 1st rb. For magic and skills, you need level 2 or higher.

10) Can a trojan drop one of their weapons after 2nd rb (since they can’t wear both weapons)?
Ans: Yes.

11) Is it worth my time to 2nd rb?
Ans: Definitely. After you have 2nd rb, 1st rb players can no longer 1 hit you unless you have bad gear and they have full 2 socks.

12) What is the level requirement for 2nd rb quest?
Ans: Level 120 for all classes. However if you create a team you can invite non-rb (can’t help you do anything but maybe kill the bosses) and 1st lower than 120 to 2nd rb map.

13) Can you the 2nd rb quest and reborn later?
Ans: You can start at lvl 120 and finish it along the way. After you have done the quest, you can wait until 130 and reborn or anytime that you wish.

15) Are horn, feather stone, vigor fragment drop when I get pked in jail, gw map, normal map?
Ans: From what other players say, it won’t drop but for your safety finish the 1st stage then get pked on normal map

17) Will moss, dream grass, soul aroma drop after I have done 1st stage?
Ans: No, they won’t drop.

18) How long does it take for the lord to respawn?
Ans: Around 20 minutes.

19) Will you get a super gem or bless your item like 1st rb?
Ans: You won’t get anything for 2nd rb, but you will get Bless skill.

20) Will guard kill bosses and satan count?
Ans: Before it wasn’t, I’m not sure about it now. For your own safety, kill it at the last minute.

22) Will I need to re-kill the 8 guards if I messed up the order?
Ans: According to kakashi19, you only need to go back and follow the order again then it will be fine.

24) Can I tank the bosses and satan without a tao?
Ans: Yes, but you need to bring a lot of pots.

25) What if I die during killing satan, guards, bosses?
Ans: You just need to come back and keep killing them assuming noone tries to kill it while you’re gone.