I’m sure some of you are struggling with gold at the moment. Actually, most of my guild is struggling at the moment. There are a few repeatable quests you can do that will net you with some quick Soul Coin (not to be confused with coin.)

-Press the “U” key on your keyboard.
-Go to “Daily” in the top left corner of the window that pops up.
-Scroll down to the bottom to the last three quests in the list.
*The Dead of the RI
*Stone Factory
*Smithfire Bandit 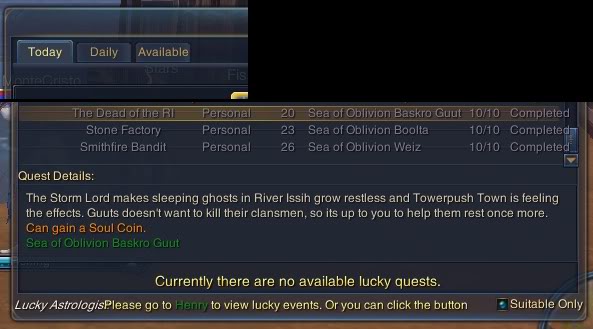 While I’m not sure if how much Soul Coin you receive per quest is different depending on your level, the amount I’ve been receiving after doing 10 quests is just under 1g50s. After doing all three of these quests, 30 in total, is 4.50gold Soul Coin.

*In The Dead of the RI quest, you get x amount of Soul Coin for every 20 undead that you kill. They come out of the water attacking the guards on the land. It’s best if you do it as a party because kills stack.

*Stone Factory changes a bit. You have three things you can do to complete the quests here. One is to escort a man on a camel carrying stones to a work site just south of where you started the quest. It’s possible that mobs will start attacking the camel to distract you from completing the quest. The camel won’t die, but you can run out of time if you ignore it for too long.

Another alternative of Stone Factory is to breaking rocks. Easy stuff. Just stand there and spam your clicking finger. As you mine, you’ll get a Spark in your bag that does around 400~ damage. When you get low on health talk to the NPC next to the rocks and he’ll heal you to max health for free.

Alternative #3 for Stone Factory is mining rocks behind the buildings where you started the quest. You only need to get 10 rocks here, but after each one a worm appears out from the ground and attacks the nearest person or pet.

The trick here is to hop onto your mount and get your pet to stand right next to the rock you are about to mine. As you begin to mine (it takes like 2 or 3 seconds for the timer to finish), hold down a directional key, wasd, and run immediately away from the rock. The worm will agro onto your pet and do incredibly low damage to it. You’ll want these worms to not agro you and to agro your pet instead because they interrupt your mining and paralyze you. Using your pet as a meatshield will speed up the quest time.

*Smithfire Bandit is very easy. Start the quest at the NPC. He’ll ask you to lure mobs to his teammates. I’ve tried to lure mobs in 5 and 6 at a time, but it would only count as 1. What you’ll be doing here is running across the path to the bandits, attacking once, and kiting it over to the NPC’s. For each quest you only need to do it 3 times to complete (remember, there are 10 in total per day.)

Enjoy that easy gold. As far as I know, this is the be easiest and most accessible way to get gold & starts at level 20. You can get a closer look in the picture above. I’m guessing here, but I’m expecting more quests just like this as I level up higher in the game.

Now, about the Crafting… DON’T IGNORE JOBS (CRAFTING)! You’ll save a ton of gold if you craft. Don’t ignore it! With Alchemy and Botany at level 2, I never have to buy potions at NPC’s anymore. Take a look for yourself and you’ll see that it’s more expensive to buy pots at NPC’s than if you craft them yourself! I’ve saved my self a considerable amount of gold using this so far.

No, really… Take a look. Would you rather buy pots and spend 1s5c per LV20 health potion or 10c each?

When doing Botany, you’ll reach LV2. These herbs are all in Sea of Oblivion. The Violet Kelp should always be in the water if you have trouble locating any. It’s like seaweed irl. I couldn’t find it above water so I immediately checked and found it underwater since I’m used to getting tangled up in kelp when I go surfing irl. It sort of “clicked” as to where I’ll find it instead of wandering around clueless.

Parchment Grass looks like a small green plant. Date Palm plants are those big ass palm trees. You can actually cut them down, which is a bit surprising to me. Undead Essence and Bone Ash come from those elite mobs that stand in the middle of spawns. You know, those mobs that have the swords over their heads and are red dots on the mini-map. They also like to drop those obsidian shards, so you can get mats for new equipment and crafting mats at the same time.

Also, regarding crafting… I’ve noticed that maximum Essence (Vigor) and Energy, the green and blue bars in your character window, raise each level. Most importantly, if you haven’t taken the time to hover your mouse over the bars, you will regen 12 points every hour you are online and 3 points for every hour you are offline if below the maximum. I guess that means when you go to sleep at night… Leave your character logged in.

A way to manipulate that @ the moment is fishing. Fishing is set to go automatically (thank Allah) so that we won’t have to be at the each time we cast the rod. Even when you have 0 Energy left to fish with, it continuously attempts to cast your fishing rod. So while you are online gaining 12 Energy every hour, you are also fishing the second it replenishes! You can raise your fishing craft AND make gold at the same time WHILE YOU SLEEP! Kelp and Rotten Fish sells to NPC’s.. It’s a win/win situation…

As for Cooking and Socialite, I am clueless and I haven’t tried any of that out yet. Cooking should turn out to be quite useful. Fishing should play part in cooking when it comes to certain recipes, so you’ll want to check that out. Most of those cooking & fishing combination are at Cooking LV3, I think.

Also, sort of off topic… What in the world is the arrow that is above my EXP progress bar? Why is it always ahead of where my EXP currently is? Even after doing the 4-per-day praying, it’s still always ahead of where I am. It doesn’t make sense to me. LOL, is it a bug? Someone’s going to have to explain this to me…