Overview of comparison:
Human race is the most suitable as a Magician, fast cast speed means more damage output which is the purpose of being a Magician.
Zumi evasion & Anuran parry boost doesn’t helps a Magician. Further more Humans have more balance spread of STATs.

Take note that upgrading skills can potentially raise the damage of the skill to a certain point whereby any higher, the ratio of MP consumption is much more than the additional damage.
Meaning at higher levels of upgrade, the least significant the skill damage does.
Therefore the below table shows the recommended amount of upgrade, but eventually players should Max their skill towards the end game according to their preferences.
The following skill rating/usefulness are judge according to PvE. 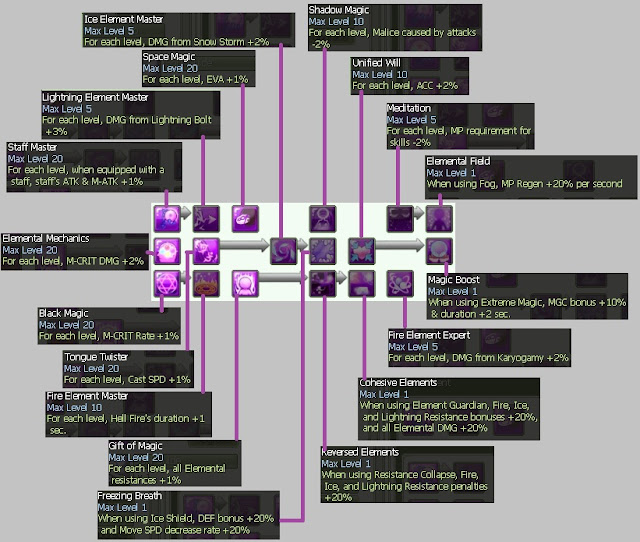 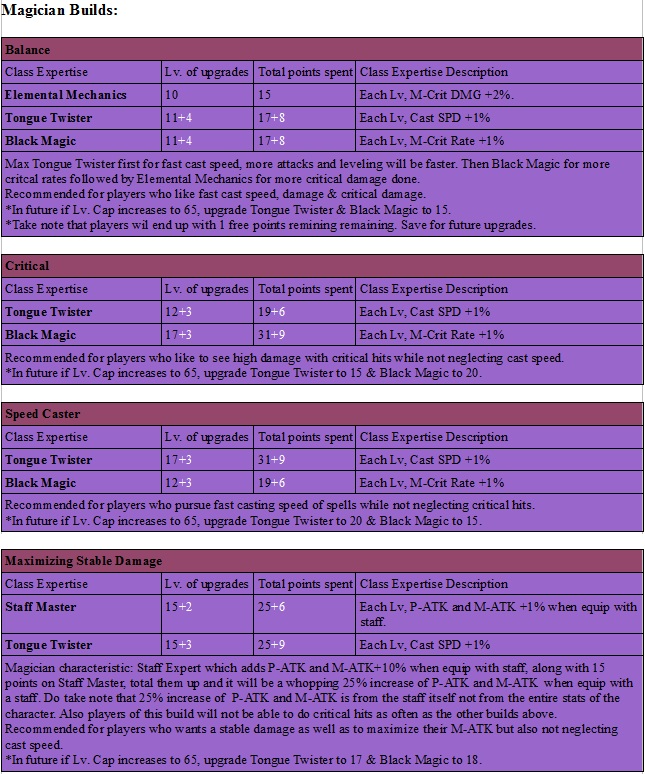 Players may wonder, why there are no points allocated in other expertise which
extends the effect of certain skill. I tested those skill that extend effect of certain
skill but some of them are either bug or no effect at all.

Most importantly, increase expertises which affects STATs are more important as
it will increase the damage done on a overall scale than increasing the effect of
a single skill.

So why is Cast-SPD needed for expertise?
Magician naturally have a Characteristic of “Essential of Casting” which increase
Cast SPD+5%, more cast SPD means less casting time, more damage done.
Also Magic Boost not only boost your M-ATK but also cast SPD.
Though some players will prefer their builds going towards M-CRIT rate or
maximizing their magic attacks, it’s all preference.

For example:
My Magician with a natural characteristic “Essential of Casting” which adds Cast SPD+5% which is shown below:

Lets take Fireball with a cast time of 1.5s to do this calculation.

Tested in game Fireball’s cast speed is around 0.9s.

From the table, the only useful certificate you can equip is Elemental Fusion I & Sorcery Knowledge I.

Players will need to get the following certificate to improve on: