Eden Eternal has 15 total classes. These classes are separated into five different families: 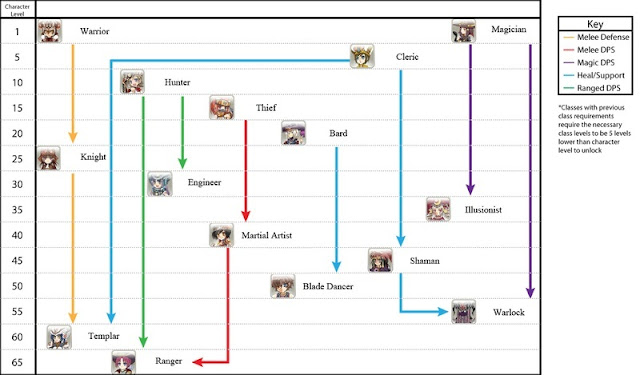 As of the 4/13 TW EE update, class expertise have been redone to work in a tree format. This enables each class to branch out into more diverse play styles.

Class License
With the wide variety of classes that lets players enjoy different roles and party compositions, as long as the class reaches a certain level class licenses become obtainable.

When equipping specific licenses, the character is able to receive special abilities. Even more spectacular is how even while changing jobs, the various licenses are still able to be equipped. The combination of licenses is a vast knowledge with the strongest combinations left for you to discover!

Increasing the character level increases the number of licenses able to be equipped.

Melee Defense Classes
As the name suggests, the classes use high defense heavy armor and fights in close-quarter combat.
The shared skills consist of wide area attacks and aggro skills enabling the classes to stand in the front lines defending their allies from enemy attacks. They are also the optimal classes for hunting monsters as most monsters are either afraid of being sliced or pierced. Other than their basic weapon and shield, by carrying around a bow or a gun, no matter what monsters encountered, you can quickly initiate the battle.

Melee DPS Classes
While the leather armor that melee dps classes wear have less defense than heavy armor, leather armor increases attack speed and damage output. With attack replacing defense, in a short period, the melee dps classes seek to deal out large amounts of damage while dodging their opponents’ attacks.
The shared skills consist of area damage skills and buffs boasting of the quickest cooldowns. Not only do they increase the parties’ damage output and evasion but the classes also deal out unbelievable amounts of damage.

Magic DPS Classes
Magic DPS Classes have the most area damage skills. With their fire, ice, and lightning skills, the classes are able to easily take on monsters.
While having the strongest area damage damage output, magic dps classes have the lowest defense due to wearing robes. Due to their low defense, lack of healing skills, and survival buffs, magic dps classes depend on pulling skills while watching the number of monsters they drag and their health so they don’t have frequent accidental deaths.

Heal/Support Classes
Heal/support classes wear robes. With their shared skills consisting of both area damage attacks and support skills, the classes are not just for sitting in the back row but also have the ability to solo fight. They are also the only classes to have a revival skill. Whether it be fighting bosses or exploring a dungeon, these classes are vital to the party. If you have to talk about shortcomings, it is that there probably aren’t many monsters you can attack with support skills.

*No, you are not crazy. For balancing purposes, the Shaman’s summon was changed when TW EE went into OB.

Ranged DPS Classes
Ranged DPS classes specialize in ranged attacks using weapons such as bows and guns. While they are the only classes that don’t have shared area damage skills but the wide array of class specific skills makes up it.
While ranged dps classes don’t have amazing area damage damage output, the shared skills are optimal for controlling the field. Decreasing movement speed and even locking opponents in place, the leather armored ranged dps classes don’t have to worry about monsters getting close and attacking.