Renegade is the first MF map.

You will spend some time here.
Jia xu is the first good spell-caster.
Cai Yan is a must have for gambit build player. If you choose WU, you can use Sunshang xiang instead.
Guan lu dropsblue weapon.
Legion drops blue armor. Very good gears.
You should try to get them.
Complete map get a blue horse. Upgrade it if u want use gambit hero.

Many gambit enemies in this stage. You should start increase your gambit defense.

Complete map get  a green book.

Very shot one, nothing special. Not hard

Complet map get a green armor.

Zhanglu’s legion drop green armor this is super good one!

After pass Liu biao. You can move your city to next lvl 40-60 places.
But if you are not top guys, better not move too ealry.
Your current palce still have many weak players, you can keep faming them for a while.
And if you keep your city hall at lvl 35, you won’t lose rally if you lose. Also you have many extra points in legion battle.

After lvl 36. This world will have more challenges!

At this map you can get Yi ji and Liu biao. The only 2 Drums generals you can recruit in the map. Very useful for gambit team.
If u only need 1, Liu biao is better for sure.

Wen pin is the first hard enemy in this map.
If you can not beat him. Don’t waste time and food to try your luck.
Training your heros, upgrade your items, come back second day.

Wang wei is the hardest one the map.Many ppl stopped here for long time.
If you beat him, liu biao is much easier.

Zhang yun drop green armor. Try farm him, you have many time now.

Liu Biao’s legion will drop RED WEAPON !!!
Most of time it only drop fragments. But remember! IT HAVE CHANCE TO DROP A WHOLE RED WEAPON!

Complete map will get ayellow weapon.

If you already passed liu biao. Here is not too hard for you.

Sha Moke is a good general.

Complete map will get a yellow horse.

Zhang ren is harder than every one else. Pass him need luck.

Get Crimson Cuirass (Yellow Armour) when you complete this stage.

Start from Liu biao stage. You can do scenario now.

In every stage, the scenario icon will show when you complete 80% of that stage.

Now you can stop use all your extra rallies on legion. Use some of the to do scenario.
Is very good.
If you complete it fast, you can get 12k silver and 10 tokens. Very good reward.

I just share some of my experience at liu zhang scenario.

The fastest way is RED line. Use quick match after beat leng bao. This way will use 3:11. This is the fastest i know.

At beginning you not that strong, then Blue line is a good choice.
Use quick match after beat leng bao.
Then atk Liu gui at his left side. that will give you 10% extra atk bonus. Because we have quick math, it only waste 2 sec more.
Then get Battle boost, use it before atk Zhang ren, forest also gives 10% atk bonus.
Last step Lei Tong at his left side get 10% atk.
This will take about 3:40. You still can get the highest reward.

Not hard this stage.

After you pass liu zhang. This stage no big Chantalle for you.

Ma teng is a very good general just need to time to build him.

By the way. Liu zhang is weird. Look at his stats, he must be the worst gambit general ever……

This Stage is much harder than Ma Teng.
All those barbarian have high def, that means you need longer time to kill them.
And most of them are gambit and spell generals.
So increase your def to live longer, fight longer is key to pass this stage.

Wutu Gu is the best iron wall general.  Great stats, highest troops increase rate. With his unit type and skill he can do perfect def and awesome atk. Maybe many ppl don’t need a tank for now, but it worth to train him for the future.

Zhu Rong is another good one. AOE with stun affect, that’s nice. But the chance of stun mostly depends on the unit lvl deference between she and her enemies. So if you want use Zhu Rong you should ready to increase her lvl fast and reincarnate fast to make sure she have unit lvl advantage.

Golden ring and legion will drop red weapon.
This is a very good stage.
You have enough reason to farm here for a long time.

Notice 1: Brown ppl don’t do hou xuan. If you do that you will block the way.
Notice 2: If blue ppl can not kill 3 ppl. just go forward. Let purple ppl do that. 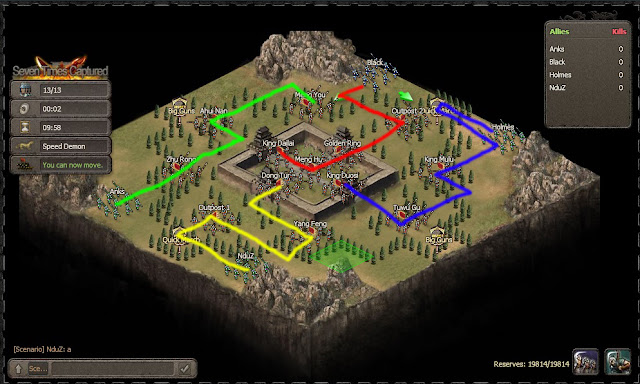 pass this map need around 3200 atk horse if u use gambit general.
have 1 or 2  800+def armor for ur gambit and dancer will be much easier, but if u can get that, 600 def is good enough
no matter what kind of gambit u use, 1 gambit +1 dancer + 3 drum is the best way here
some ppl use siege help gambit, but in this map better use a drum replace ur siege, because all enemies have high normal def on this map

lu bu is much harder. most of ppl will stay here for a while.
not hurry, do some legion before that, legion have good battle points, higher rate drop purple wep.

when u have enough silver, lvl ur horse wep and armor up, u will beat lu bu soon or later.

ya…if u really want beat lu bu earlier…. u have to way:
1. if u use hua xin, liao hua, pan zhang……..keep try….hope dancer success every times and ur gambit will critical at least 2 times…..
2. change one def general back. some ppl still keep yuan shao, that’s good. But better use hua xiong or wutu gu…or zen….those shied skill generals.. let him face lubu.

diao chan is a good dancer, can replace cai yan. but no big difference, if ur cai yan already reinc many times, no need to do that.

OLD Battle of Puyang (as of the latest update the enemy armies no longer spawn at a fixed place, see below) 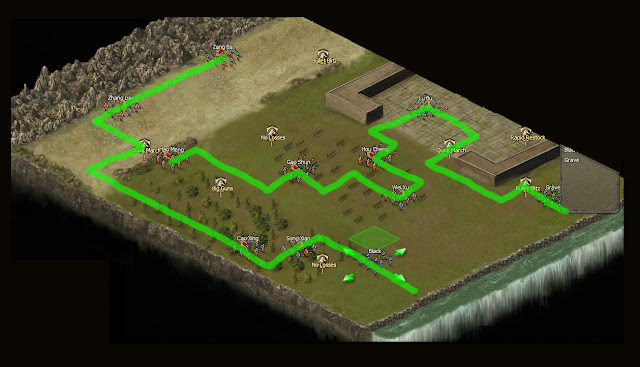 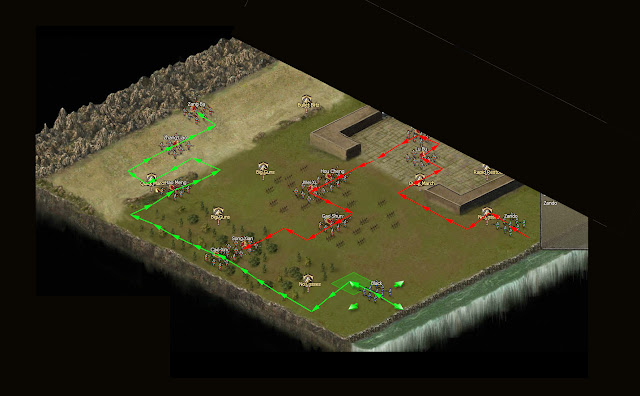 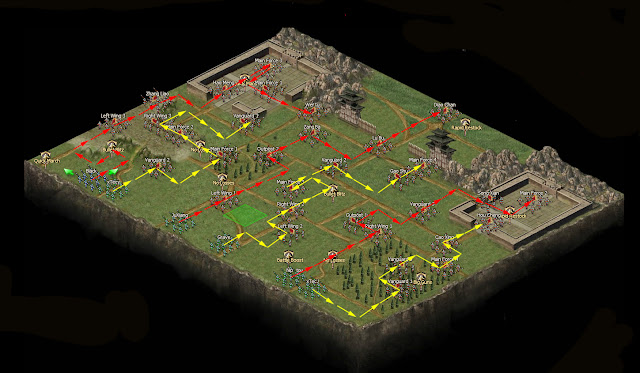 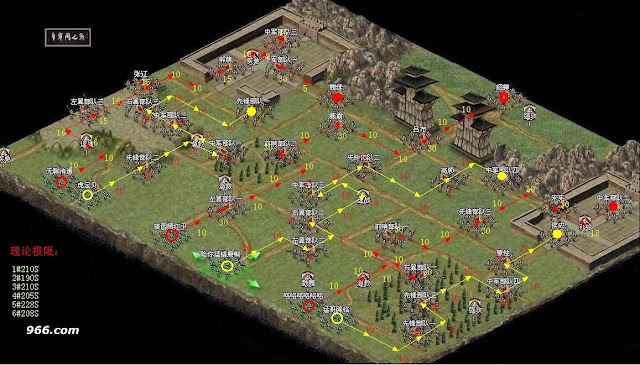 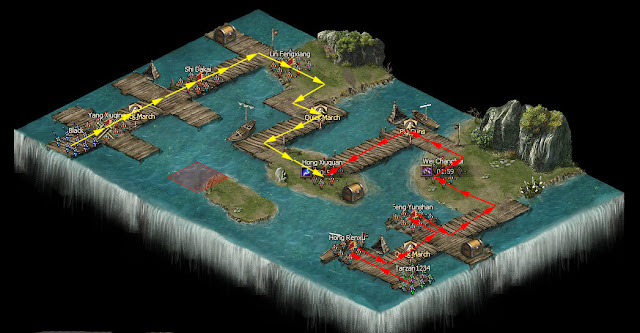 There are 3 possible locations for the treasure chests, but only a maximum of 2 chests will appear. These bonus chests will be added to the treasure total for each players so if you collect one bonus treasure both players will get +1 for their ending treasure amount. You have to decide whether you have enough time to collect bonus treasures.
You gain a standard 12 treasures for Speed Demon, 10 for Road Runner and 8 for Hare.

For speed demon, use reinforcements after getting stunned for the first time as you can’t move anyway and by the time the reinforcement cooldown is over the stun will be over too. Both players should only use Quick March after defeating their second enemy to maximise the speed gain.